You can count on cyber thieves to take advantage of a crisis, like the novel coronavirus (COVID-19). The WEBROOT threat research team discovered cybercriminals taking advantage of the news cycle, including using logos from trusted sources like the World Health Organization (W.H.O.) in phishing emails and hiding malware in COVID-19 online trackers.
Now is the time to remain vigilant when opening emails and clicking links. Here are a few best practices you should consider so you do not fall victim to a coronavirus-themed phishing scam or ransomware attack.
Beware of coronavirus-themed emails from unknown senders
Cyberthieves have already begun sending out malicious emails disguised as public service announcements. Make sure you closely inspect the sender details and email address in the From line of your emails. Avoid clicking on any attachment unless you’re absolutely sure who sent it.
Be suspicious of requests for personal or financial informationWatch out for urgent requests for personal or financial account information. Attempt to verify the sender, by phone if possible, before you send, confirm or update account information.
Beware of suspicious linksCyberthieves may try to use coronavirus-themed links to deploy malicious code onto your device. Inspect the URL for any links before you click on them. Make sure links are directing you to reputable sources. Better yet, type the URL directly into your browser.

Online Shopper Records leaked
Up to 8 million sales records were discovered in an unsecured MongoDB database that has been misconfigured indefinitely. The researcher who found the database quickly contacted the third-party service company that managed the database, and the database was secured five days later. The database contained approximately four million records related only to Amazon UK and eBay, mainly consisting of payment and contact information for online shoppers

There are sounds of setting up a group of ten persons/countries to rule the world. Abolishing Presidents and Kings Governing Their Lands. Deprivation of the power of the President of America, China, Brazil, of every country in the world. This is the fulfillment of Daniel 2:31-45. 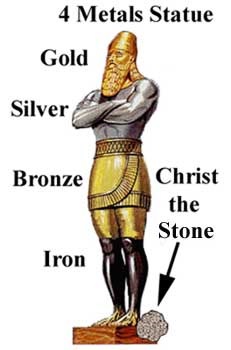 "You saw, O king, and behold, a great image. This image, mighty and of exceeding brightness, stood before you, and its appearance was frightening. 32 The head of this image was of fine gold, its breast and arms of silver, its belly and thighs of bronze, 33 its legs of iron, its feet partly of iron and partly of clay. 34 As you looked, a stone was cut out by no human hand, and it smote the image on its feet of iron and clay, and broke them in pieces; 35 then the iron, the clay, the bronze, the silver, and the gold, all together were broken in pieces, and became like the chaff of the summer threshing floors; and the wind carried them away, so that not a trace of them could be found. But the stone that struck the image became a great mountain and filled the whole earth. 36 "This was the dream; now we will tell the king its interpretation. 37 You, O king, the king of kings, to whom the God of heaven has given the kingdom, the power, and the might, and the glory, 38 and into whose hand he has given, wherever they dwell, the sons of men, the beasts of the field, and the birds of the air, making you rule over them all--you are the head of gold. 39 After you shall arise another kingdom inferior to you, and yet a third kingdom of bronze, which shall rule over all the earth. 40 And there shall be a fourth kingdom, strong as iron, because iron breaks to pieces and shatters all things; and like iron which crushes, it shall break and crush all these.41And as you saw the feet and toes partly of potter's clay and partly of iron, it shall be a divided kingdom; but some of the firmness of iron shall be in it, just as you saw iron mixed with the miry clay. 42 And as the toes of the feet were partly iron and partly clay, so the kingdom shall be partly strong and partly brittle. 43 As you saw the iron mixed with miry clay, so they will mix with one another in marriage, but they will not hold together, just as iron does not mix with clay. 44 And in the days of those kings the God of heaven will set up a kingdom which shall never be destroyed, nor shall its sovereignty be left to another people. It shall break in pieces all these kingdoms and bring them to an end, and it shall stand for ever; 45 just as you saw that a stone was cut from a mountain by no human hand, and that it broke in pieces the iron, the bronze, the clay, the silver, and the gold. A great God has made known to the king what shall be hereafter. The dream is certain, and its interpretation sure."
The group of ten persons/countries that will rule the world is the fulfillment of these ten toes!
We are approaching the Rapture of the Church, still months, 1 or 2 years? But the Great Tribulation is coming! Now the task of Christians is to pray so that unbelievers shall believe in the Lord Jesus Christ as Savior and Lord. And the Christians who still live in the flesh and do not live according to the prescriptions of God and the Bible, change their lives and accept Jesus Christ as Lord.

For at the end of the Great Tribulation Revelation 17:12

And the ten horns that you saw are ten kings who have not yet received royal power, but they are to receive authority as kings for one hour, together with the beast.

Now let the Christian be the power of prayer that invokes God. But there is no point in calling upon God if the Christians themselves do not live to the honor and glory of God. This corona virus and Covid-19 is a permit from God to satan to bring humanity to faith in Jesus Christ and for Christians to live by Biblical laws and standards. Without repentance from sin, God will not listen to the prayers. Let's listen to God so that God will continue our prayers and put an end to these viruses and panic in the world.